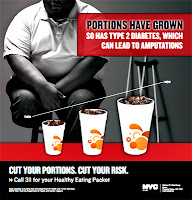 Obesity is a health problem in the U.S. But for cities and states who have to pay for the effects of obesity through increased health care costs, it’s an economic one. Thus, we’re seeing a rash of new campaigns designed to scare people into eating less.

This effort from New York City is drawing criticism because it’s “graphic” use of an amputee to demonstrate the effects of type 2 diabetes that results from eating too many super-sized fast food meals.

I don’t really have a problem with the image. It’s more with the strategy and tone.

Yes, sometimes in order to get people to see the truly destructive nature of their behavior we have to have an intervention. But usually those are held in private with a few close friends and family members shining a light on the ugly truth of one’s life. Public shaming rarely has positive social effects.

My other issue is with the ham-handed copywriting and artless design.

Some may compare this to the “Truth” anti-smoking campaign that used much more graphic images and has been effective at keeping kids from starting to smoke, but there’s one key difference.

In this ad, you’re the bad guy. You made the choice to eat and drink to much. In the Truth campaign, the Tobacco companies are the target. Having a “devil” tempting you makes it easier rationalize walking away from something you desire.

Obesity is a problem that needs to be dealt with. This is just the wrong way to go about it.